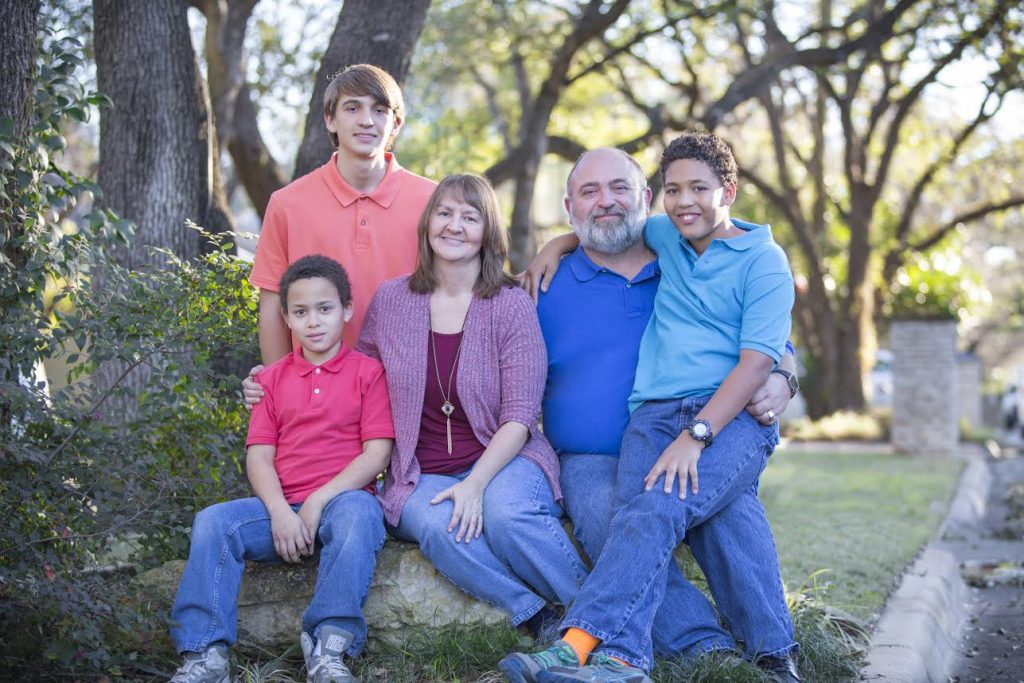 Shannon and her husband, Bruno, have three boys that keep them on their toes: Nico (15), who is into crew and Boy Scouts; Landon (10) who digs basketball and the reward of screen time; and Andrew (12), the cool cat of the brothers who brings humor to his interactions. Landon and Andrew are adopted.

The family is boisterous and abounding with love. Bruno is proudly – and loudly – half Italian and half Greek. The best place to find Greek food in Austin? “My kitchen!” he boasts, as Landon pipes up that “Zucca” means pumpkin in Italian.

But the family is on a health rollercoaster. In September 2016, Shannon’s routine colonoscopy found colon cancer. In October 2016, Shannon had surgery to remove the tumor in the colon. A few weeks later doctors discovered that there was cancer on her liver as well. Diagnosed with stage IV colon cancer, she faces additional surgeries and chemotherapy. But they’re not alone; the Zucca family has Wonders & Worries in their corner.

Children and young adults process information much more literally than adults. It’s one reason Wonders & Worries child life staff make a point to use the real names of diseases and encourage honest conversations. Shannon knows firsthand this makes a difference:

“When we found out we were adopting Landon, Nico was young. It was night and we were driving to pick up Landon and bring him home for the first time, when Nico very matter-of-factly said, ‘If you’re going to abduct a baby, abducting during the night is better than in the day. You’re less likely to get caught.’ We were quiet a moment then I said, ‘Honey, we’re not abducting a baby. We’re adopting a baby.’ Bruno and I laughed but realized we needed to get this straight.”

Adults often assume children know certain information as well. For instance, it’s common for families to talk about germs and keeping things clean because chemotherapy weakens the immune system. For the Zuccas, this meant explicitly telling the boys not to eat directly from the peanut butter jar, because it could spread germs.

“Landon thought that meant that he could get cancer from eating after me!” Shannon said. “It was eye opening to hear that, and it would never have occurred to me that that’s how he interpreted our conversation.”

A FOUNDATION OF EMPATHY

What children and teens learn at Wonders & Worries isn’t limited to disease. The goal is to build well-being for life with tools for coping, communication and compassion.

“Before Wonders & Worries, if we’d asked the boys to help around the house more, it would have been world war three. But child life staff member Ali Houshmand talked to them about what to expect – that I might lose my hair, that I could feel nauseous and be hurting – and that because of that, they should be more patient with me,” said Shannon.

Now Andrew does some of the laundry; Nico oversees loading the dishwasher and Landon is in charge of emptying the dishwasher. The new approach is working. “Rarely have they complained since talking with Ali.

Because of Wonders & Worries they have a foundation of empathy that will serve them beyond this moment.”

Though children 2-18 are the primary group served, parents can also feel lost. There’s no rulebook on how to parent during an illness. All Wonders & Worries parents receive consultations and referrals to additional resources.

For Shannon and Bruno, they’ve picked up more than a few tips: “We’ve gained basic communication skills. Ali told us that when our tone of voice goes up, it increases our stress and affects the kids. Some families might not need that instruction, but we did. We’re arguing less and making a conscious effort to be less loud.”

One of the financial strains of serious disease is traveling and lodging during treatment. Before Shannon’s diagnosis, she was the primary breadwinner.

She describes the transition as, “Boom. All of a sudden, I can’t work. And the medical costs add up like crazy.”  During Shannon’s upcoming surgeries, Bruno will stay in a hotel with her, which means buying food, paying to do laundry, eating out. The boys will visit on the weekends with their grandmother, involving money for gas and an additional hotel room.

We would not be able to afford the help our family needed if we didn’t have Wonders & Worries. Finding out that services were free was an answer to our prayers.” – Shannon and Bruno