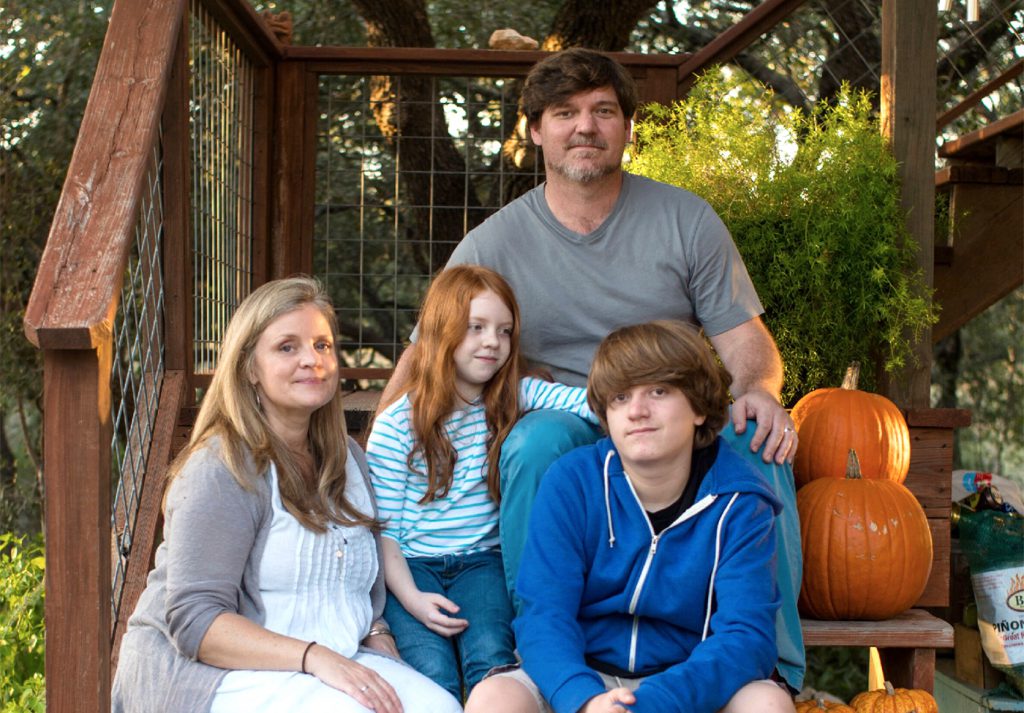 Parents Kim and Andy sought help from Wonders & Worries in telling their children, Philip and Chloe, aged 12 and 9 respectively, that Kim had uterine cancer. When Kim was diagnosed with cancer in December 2012 she was overcome by many emotions, but first and foremost she thought of her children. “How was I going to tell them? How do you lay a bomb like that on your kids?” she asks. A social worker at Texas Oncology brought Kim a flyer highlighting the services offered by Wonders & Worries. “I knew this was something I wasn’t going to be able to manage on my own. We needed help.”

How was I going to tell them? How do you lay a bomb like that on your kids?

In August of that year, the family experienced a major shift. They moved to a new city where the kids each attended new schools and Andy started a new job. Things were beginning to settle when Kim received her diagnosis. Philip was blindsided, he says. “I thought everything was going to be fine now that my dad had a new job, but when my parents told us about the cancer I felt sad because nothing had really happened like this before, something so serious.” Chloe says that when her parents told her about her mom’s cancer, she was scared “because I thought cancer was really bad, that you could die from it.”

Kim describes how the kids did not want to go to Wonders & Worries at first. “Chloe actually hid from Ali [our child life staff member] on the first visit. But by the end of that first session the kids were completely turned around. I saw how their faces had changed. For the first time in those terrible weeks I saw happiness. Wonders & Worries meant the world to our family”.

Kim loved all the projects Chloe and Philip discussed and brought home. The children learned about the scientific aspects of cancer, supplementing the cell biology Philip was learning in school. Chloe’s favorite part of Wonders & Worries was “the people you do the projects with; they listen and try to understand you. I also liked throwing toilet paper! We made a target, put cancer in it and threw pink toilet paper at it in the back yard at Wonders & Worries.”

No one can really prepare you in any way for how you’re going to feel emotionally.

Philip describes his favorite aspect of Wonders & Worries as “the freedom we have to talk about what we want. Ali listens and tries to understand and gives you a place where you can be open and free. We don’t really ever have this kind of freedom since we spend the majority of our days in school and under lots of rules.” Wise beyond his years, Philip also expresses that “Wonders & Worries helped us emotionally be able to deal with all of what was happening to us.” In the course of her treatment, Kim’s ability to communicate with her family faltered. “No one can really prepare you in any way for how you’re going to feel emotionally,” Kim says.

She began to withdraw from her family. “I was losing the ability to communicate with my children, which was so strange because we’ve always been verbal and open and can talk about anything, but I was shutting down. The sicker I got from radiation, the worse it got.” Ali helped Kim to be truthful with her kids about the situation. “He helped me be honest about how sick I was and how horrible I was feeling instead of hiding it to protect Chloe and Philip, which doesn’t help them at all.” Kim continues, “Our kids learned coping tools at Wonders & Worries that they can use for the rest of their lives. Ali repeatedly reminds us that we’re family now, forever.”

As radiation progressed, Kim could not drive, presenting challenges to Andy’s ability to juggle transportation for the family to school, work, and treatments. “I stayed home for a couple of weeks, but then we had to ask for help from people we barely knew,” Andy says. “Ali’s support in that time made me feel reassured because he worked with others in the same situations. Anytime I talked to him he was always encouraging, positive and helpful. I don’t know what we would’ve done otherwise.”

It’s the least we can do, to be there for other people.

Today, Kim’s cancer is in remission and the Pickards are focused on moving forward, strengthening their communication, and coping with emotions as they arise. “We have family movie night, s’mores on the porch, and we get good use out of our go-cart. We sing and play music at home, with friends and at church. We also love Just Dance!” Kim says. “We try to talk and communicate about how we’re feeling.” However, the family still has a long road ahead of them. “It still doesn’t feel like it’s over,” Kim admits. “When I have to go for a checkup it brings up anxiety and all I can do is try to be real about it. It’s still hard, even now, as healing evolves, but it’s good to know that we can talk to somebody.”

When asked to choose a single word describing how Wonders & Worries made them feel, Philip says “hopeful,” Chloe says “happy,” and Andy says “tranquil or calm.” Kim, however, calls Wonders & Worries “a lighthouse.” She continues, “My hope in sharing our story is that if there is somebody else out there like us, in a similar situation who needs to relate, I need to be available for that. It’s the least we can do, to be there for other people.