Despite record rainfall and threatening skies, Wonders & Worries’ 2018 No Worries Classic saw a record number of teams and shooters on Oct. 19, 2018. The annual sporting clay shoot raised more than $188,000 for the nonprofit that provides free professional support to children during a parent’s serious illness.

This means that 62 more families can enjoy a year of full support from Wonders & Worries at no cost. 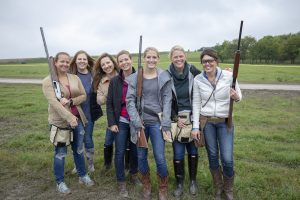 The continuing generosity of presenting sponsor Alice Kleberg Reynolds Foundation and the donation of the Exotic Game Ranch and Pavilion by Texas Disposal Systems (TDS) in Buda, Texas has allowed the event to raise more than $2.9 million in its 11-year history.

“Wonders & Worries is such an amazing organization to come alongside kids during the hardest times of their lives and provide support in a way no other organization can,” said Jennifer Gregory, marketing director at TDS. “We are honored to have partnered with Wonders & Worries for the past 11 years to further the great work they are doing.”

The day kicked off with the nearly 140 shooters and 40 volunteers giving full attention to Jeff Foster, his wife, Christy, and their son, Jake. Jeff is the owner of Apex Shooting in Austin and a renowned instructor and competitor. In June 2018, his 15-year-old daughter, Jessie, found him in the throes of a grand mal seizure at their home. Watch their video: