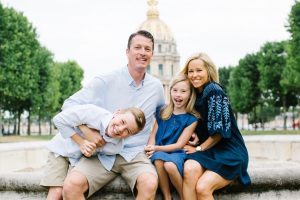 Since the first shoot in 2008, the event has raised more than $2.8 million for the Central Texas nonprofit Wonders & Worries, which provides children and teens with free, professional support during a parent’s serious illness.

More than $40,000 in prizes were given away from Texas businesses Kendra Scott, McBride’s Guns Inc., Sportsman’s Finest and YETI, to name a few. All shooters took home a YETI LoadOut 5-Gallon Bucket.

Amidst the good-natured jockeying, the reason for the event was not lost. David and Kelly Mebane spoke about their experiences with Wonders & Worries as parents to Weston (age 11) and Caroline (age 9). At 37, David was diagnosed with advanced heart disease, and at 39 he survived a heart attack. He now has five stents. Watch their 10-minute presentation.

“What we didn’t realize was how much it was impacting our children,” said David.

But one evening in May 2017 it became clear that Weston and Caroline needed support. David was invited so speak at the American Heart Association. A video interview that the couple had recorded was shown during dinner.

“During the video, our son, Weston, just started sobbing at the table,” shared Kelly, her voice breaking. “I was really surprised; I didn’t know that he was hurting so much.”

“I love that Wonders & Worries knows what our children need, no matter what their personality is, and they give them the space to process it,” continued Kelly.

Watch Weston talk about one activity he completed with child life staff Ali Houshmand, that helped “lift the burden” off his shoulders:

The results in both children are notable. “We didn’t see it at the time, but his grades were slipping and he was having trouble socially,” said Kelly. “Now, he comes home with wonderful grades and is just thriving. And so is Caroline.”

For more information about No Worries Classic 2017, read the press release or contact Penney Berryman, Communications Director, at [email protected] or 512-329-5757, Ext. 202.